Local radio legend Red Robinson was Master of Ceremonies for the event. He was the program director for C-FUN 1410 at the time…

Halfway through the show, Robinson was told to get back out on the stage and tell the rowdy concert-goers that they would have to calm down, or the Beatles would have to leave.

“I walked out on the stage at the end of a number, and said: ‘We’ve got to back some people up, there’s been two kids crushed already, they’ll have to cancel the show.'”

“John Lennon said, ‘Get the F… off our stage, nobody interrupts the Beatles!’…”

Vancouver, the first Canadian city the Beatles played, clearly had no idea what was to come when over 20,000 fans packed the open air stadium.  A waist high fence was reinforced by police, pushing back with all their strength to keep it upright while fans crushed forward. St. John’s ambulance crews loaded casualties on stretchers and carried them away. After regaining consciousness some staggered back, not wanting to miss the show of a lifetime.

The stage was not very high, and only a few feet from the mayhem.

100 of Vancouver’s finest were credited with preventing a riot and tragedy.

The tempo was quick; the Fab 4 couldn’t get through their songs fast enough.

A half hour in, they dropped their instruments and ran. 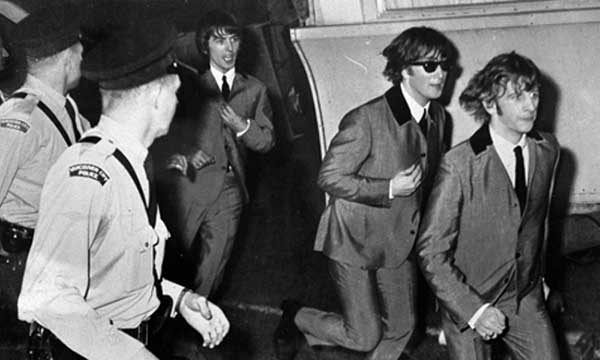 running for their lives

They were on the road in the limo, surrounded by motorcycles, less than one minute after finishing Long Tall Sally, their 11th number.

I still love you, Ringo.